CIOs in the Cloud: Pinning Down Risks and Rewards 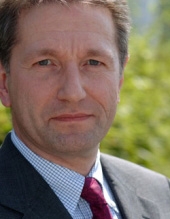 For the first time in our 10-year history, the Center was pleased to present three chief information officers from our Roundtable on Digital Strategies as featured speakers in the Britt Technology Impact Series. Olivier Gouin from Nestlé, Martin Petry from Hilti and Geir Ramleth from Bechtel will join Hans Brechbühl, the Center’s executive director and organizer of the Roundtable on Digital Strategies, in a discussion about the promises and potential pitfalls of cloud computing. The panel examined how CIOs balance the opportunity and efficiency brought by this new technology with the need to maintain reliable and secure networks. Cloud computing promises to help satisfy a relentless push for scalability and cost-reduction in IT networks but it also raises important questions about whether sprawling networks possess the strength and safety to keep up with the robust demands of global enterprises. CIOs must marshal resources to advance a broad technology agenda that keeps pace with innovations like cloud without putting at risk the bedrock IT functions that keep enterprises running. The rise of cloud computing adds an interesting layer to the calculus of risk vs. reward.

Roundtable on Digital Strategies European Chapter Member
Olivier Gouin, Senior Vice President and Nestlé Group CIO, is the Group CIO since 2003 and the GLOBE program director since January 2007. GLOBE is a global initiative aiming at harmonizing best practices among all business units at Nestlé, establishing standards for managing master data and standardizing information systems and technology. After joining the Nestlé Group in 1987, Olivier held several positions in IS/IT from Information Systems development, Information Systems & Logistics worldwide coordination, Nestlé France CIO before leading the GLOBE IS/IT team. Olivier started his career in engineering, before moving into IS/IT consulting. Olivier graduated from the Swiss Institute of Technology in Lausanne (Switzerland) with a master degree in Mechanical Engineering and has an MBA in Finance from the Miami University (USA).

Roundtable on Digital Strategies European Chapter Member
Martin Petry became Hilti’s CIO in 2005. He is responsible for 400 IT employees based in Schaan,Tulsa, Oklahoma and Kuala Lumpur, Malaysia. In recent months, Martin was asked to be in charge of Hilti’s Business Excellence initiatives. He first came to Hilti in 1993 and has held various leadership roles, including project manager of Oracle Applications implementations in Great Britain and in Japan, head of second-level support for Oracle Applications, IT Strategy development. Mr. Petry currently heads Hilti’s global SAP implementation project of standard business processes and SAP (global single system/single instance approach with ERP, BI, CRM and SCM) now being used by 15,000 users in 40 countries. He has headed up Hilti’s global SAP implementation since 2000. Mr. Petry earned his PhD in applied mathematics from Georg-August University in Göttingen.

Roundtable on Digital Strategies European Chapter Member
Mr. Ramleth is senior vice president and chief information officer of Bechtel Group, Inc., where he leads the global Information Systems and Technology organization. Prior to rejoining Bechtel in January 2002, Mr. Ramleth held leadership positions for a variety of companies in the technology and communications industry. Among his responsibilities in those roles, he defined strategy and market position and secured multiple forms of financial resources. Previously, Mr. Ramleth served as chairman and CEO of DigiPlex S.A., based in Zurich, Switzerland, which owned and operated large communications and networking facilities throughout Europe. Prior to that, he served as president and CEO of Genuity, a Bechtel Enterprises company formed to deliver Internet and data services. Mr. Ramleth has held management positions with Oracle, PageMart, and PacTel Personal Communications.

Hans Brechbühl (moderator) Executive Director, CDS, Adjunct Associate Professor of Business Administration, Tuck School of Business
Hans leads the center’s outreach efforts. Before joining Tuck, he was group VP of corporate development for Metromedia International Telecommunications and an executive for a financial dotcom. At MITI, Hans led business development and strategy from 1998-2000, negotiating cable, telecoms, and internet deals. As managing director of the Davidson Institute from 1993-98, Hans co-directed a $3.5 million independent business education institute focused on emerging markets at the University of Michigan Business School. He built corporate partnerships with AT&T, Whirlpool, P&G, and other Fortune 500 companies and was responsible for establishing all aspects of the Institute’s operations as a startup. In a previous life, Hans served as an intelligence officer in the U.S. Army where he led tactical units on the Iron Curtain in Europe for six years. He holds an AM from Harvard University and a BS in engineering from the U.S. Military Academy at West Point. Hans is of Swiss heritage and speaks a number of European languages.

These CIOs visited Tuck as part of the 10-Year Anniversary of the CDS’s Roundtable on Digital Strategies.

Experience highlights from this discussion on the risks and rewards of cloud computing.

Geir Ramleth, CIO at Bechtel, discusses how the cloud gains precious time for companies, time that may lead to a competitive advantage. Might IT go from a provider of services to an aggregater of services?