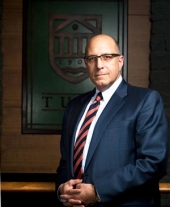 Inc.
Alex Dudley is Vice President, Public Relations, at Time Warner Cable, where he is responsible for the company’s interaction with national and trade media, and overall public relations strategy. Mr. Dudley joined Time Warner Cable in 2007 and was promoted to Vice President in 2008. Prior, Mr. Dudley was a Senior Vice President at Dan Klores Communications in New York, where he worked on a diverse array of crisis and corporate accounts, including Microsoft, Cablevision, Emmis Communications, Fox News Channel, SAC Capital Advisors, Cantor Fitzgerald LP, US Weekly/Wenner Media, Vitaminwater, Sirius Satellite Radio and others. Mr. Dudley began his career in New York State government, holding a series of communications positions in the Pataki administration, including the Department of Transportation and the Empire State Development Corporation. Mr. Dudley, a graduate of Columbia University, currently resides in Darien, Conn., with his family. Time Warner Cable, the second-largest cable operator in the U.S., serves more than 14 million subscribers in 28 states, and delivers a broad range of video, voice and high-speed data services to residential and commercial customers.
Follow Alex on Twitter >

Paul first experienced the influence of social media as part of a team managing an Ingersoll-Rand subsidiary’s response to an online-driven crisis. The incident, involving Kryptonite locks, served as one of the seminal events signaling social media’s central role in corporate communications and crisis management. Since that time, Paul has led his organizations’ growing use of social media and online social networks to drive thought leadership, client and employee engagement, and community participation. Paul holds a bachelor’s degree from John Carroll University and a master’s degree from Carnegie Mellon University.
Follow AECOM on Twitter >

As Vice President of Corporate Communications for Pfizer Inc, Ray oversees all strategy and execution of the Company’s external and internal communications programs globally including digital and social media engagements. Ray is the chief global spokesperson for Pfizer and a member of Pfizer’s Senior Leadership Council. Prior to Pfizer, he was Executive Director of Public Affairs for Merck & Co. Inc. He oversaw the Company’s global media relations programs and was chief global spokesperson for Merck. Prior to joining Merck, Ray was executive vice president/managing director of corporate communications & media relations practices for GCI Group (Now part of Cohn & Wolfe). Ray served as a member of the GCI Board of Directors. He led major international press offices for the 2004 NYC Host Committee during the Republican National Convention, Visa International’s corporate sponsorship of the 2002 Olympics in Salt Lake City and 2003 Rugby World Cup in Sydney, Australia.

Prior to his tenure at GCI Group, Ray was a manager in the media relations department of Porter Novelli, a subsidiary of Omnicom Group Inc. He managed the launch of Global One (a joint venture between Deutsche Telekom, France Telecom and Sprint); Novartis signing of Terrel Davis (Super Bowl XXXII MVP) as a spokesperson; American Express’ announcement of Tiger Woods signing as a spokesperson; and Sprint’s sponsorship of the Rolling Stones “Bridges to Babylon” North American tour. Ray is the recipient of many company and industry honors and awards. Including being named “2010 Public Relations Professional of the Year” by PRWeek Magazine. He was also named “Top 40 under 40” by PRWeek in 2009. He is a member of the CDC Business Roundtable and the Somers Education Foundation. Ray holds a Master of Science degree and Bachelor of Arts degree from Iona College.
Follow Ray on Twitter >
Follow Pfizer on Twitter >

With a background that includes serving as a communications executive and consultant for some of the world’s best-known organizations, including IBM, Kodak, Xerox, Royal Caribbean, Columbia University, Bank of America, The Wall Street Journal, Ketchum, Midwest Generation, ADM, the Arthur W. Page Society and many others; working in television for CBS and ABC; writing several books for companies and CEOs; and being a professional playwright with more than 20 productions of his plays, Rod has a unique ability to create compelling narratives that drive results. He is a member of the Dramatists Guild, holds a BA in Rhetoric and Communications from The University at Albany, and is a frequent speaker on the topic of storytelling in business.

In his current role, Rod is a director of communications for PepsiCo, which offers the world’s largest portfolio of billion-dollar food and beverage brands, including 19 different product lines that generate more than $1 billion in annual retail sales each. PepsiCo’s main businesses – Quaker, Tropicana, Gatorade, Frito-Lay, and Pepsi Cola – also make hundreds of other enjoyable and wholesome foods and beverages that are respected household names throughout the world. With net revenues of approximately $60 billion, PepsiCo’s people are united by their unique commitment to sustainable growth by investing in a healthier future for people and the planet, which they believe also means a more successful future for PepsiCo. Called Performance with Purpose, PepsiCo’s promise is to provide a wide range of foods and beverages for local tastes; to find innovative ways to minimize impact on the environment, including by conserving energy and water usage, and reducing packaging volume; to provide a great workplace for associates; and to respect, support, and invest in the local communities where PepsiCo operates.
Follow Rod on Twitter >

Panel Moderator
Professor Paul Argenti has taught management, corporate communication and corporate responsibility starting in 1977 at the Harvard Business School, from 1979-81 at the Columbia Business School, and since 1981 as a faculty member at Dartmouth’s Tuck School of Business. He has also taught as a visiting professor at the International University of Japan, the Helsinki School of Economics, Erasmus University in the Netherlands, London Business School, and Singapore Management University. He currently serves as Faculty Director for Tuck’s Leadership and Strategic Impact Program, and Tuck’s custom executive programs for Novartis. Professor Argenti’s latest book (co-authored with Courtney Barnes), is entitled Digital Strategies, published by McGraw-Hill in 2010. His other books include: Strategic Corporate Communication, published in 2009 by McGraw-Hill, The Power of Corporate Communication (co-authored with UCLA’s Janis Forman), also published by McGraw-Hill, and The Fast Forward MBA Pocket Reference (second edition), released through Wiley. He is currently working on the sixth edition of his Corporate Communication textbook as well as a new text on corporate responsibility also with McGraw-Hill. Professor Argenti has written and edited numerous articles for academic publications in his field and practitioner journals such as Harvard Business Review, California Management Review, and Sloan Management Review. Professor Argenti serves as the Associate Editor for Corporate Reputation Review.

Professor Argenti is a Fulbright Scholar and a winner of the Pathfinder Award in 2007 from the Institute for Public Relations for the excellence of his academic research in communications and strategy over a long career. He serves on the Board of Trustees for the Arthur W. Page Society. Finally, he has consulted and run training programs for hundreds of companies including General Electric, ING, Sony, Novartis, and Goldman Sachs.
Visit Professor Argenti’s Tuck Profile >
Follow Professor Argenti on Twitter >

Experience highlights of this discussion.

Alex discusses the role of social technology in corporate communications.

Paul talks about when social works and when it isn’t the right fit in corporate communications.

Rod shares his vast experience with the craft of storytelling through social.