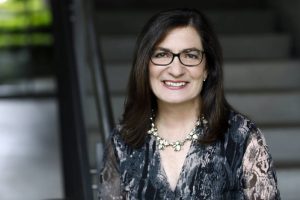 Is privacy a human right? What role can/should large, global technology companies play in determining the future of privacy online and around the world? The huge task of determining how Microsoft should answer these questions (and act) is just one reason former FTC Commissioner Julie Brill was brought into the leadership team in Redmond. Hear her discuss the state of privacy and expand on Microsoft’s role supporting and ensuring privacy is valued as a human right.

Note: This session is co-sponsored by the Center for Business, Government and Society and is a part of the 2019 Technology Conference: Shift: Leading through Digital Transformation.

Register for the conference on Eventbrite

Leading the team at the forefront of many of the regulatory issues that underpin the digital transformation, Julie serves as a global authority concerning policy and legal issues involving privacy; internet governance; telecommunications; accessibility; and corporate standards. In 2018, she spearheaded Microsoft’s global adoption of the European Union’s General Data Protection Regulation (GDPR), and now leads Microsoft’s advocacy for complementary privacy mandates around the globe. In addition, Julie serves as a reliable advisor on data protection to Microsoft’s commercial customers, to help them remain on the cutting edge of privacy improvements.

Nominated by President Barack Obama and confirmed unanimously by the U.S. Senate, Julie Brill served for six years as a Commissioner of the U.S. Federal Trade Commission. As Commissioner, Julie worked actively on issues of critical importance to consumers, including privacy, fair advertising practices, fighting financial fraud, and maintaining competition in all industries, including health care and technology.

While at the FTC, Julie was named “the Commission’s most important voice on Internet privacy and data security issues,” a “key player in national and international regulations,” one of the “top minds in online privacy,” one of the top four U.S. government players “leading the data privacy debate,” one of the “top 50 influencers on big data,” and one of eight  “Government Stars” among the Ethisphere Institute’s “2015 Attorneys Who Matter.”

Julie has received numerous national awards for her work, including the New York University School of Law Alumna of the Year Award, the 2014 Privacy Leadership Award from the International Association of Privacy Professionals, and the 2019 UC Berkeley Center for Law and Technology Privacy Award. In 2013, Julie was elected to the American Law Institute.

Prior to Microsoft, Julie joined the global law firm Hogan Lovells as Partner and Co-Director of its privacy and cybersecurity practice.  She assisted clients with navigating the complex regulatory environment governing privacy, data breaches, cybersecurity, advertising and competition issues around the globe.  Under her leadership, Hogan Lovells’ privacy and cybersecurity lawyers were named the top privacy practice in 2017 by Chambers.  That same year, National Law Journal named Julie a “Cybersecurity Trailblazer” for her thought leadership on these issues.

Earlier in her career, Julie served as Senior Deputy Attorney General and Chief of Consumer Protection and Antitrust for the North Carolina Department of Justice; and as Assistant Attorney General for Consumer Protection and Antitrust for the State of Vermont for more than 20 years.  Julie led the National Association of Attorneys General Privacy Working Group during her tenure at the North Carolina and Vermont Attorneys General offices.

Julie is active in civil society, serving as co-chair of Business at the Organization of Economic Cooperation and Development’s Committee for Digital Economic Policy; board member of the Center for Democracy and Technology; advisory board member of the AI Now Institute; and member of the National Academy of Sciences Intelligence Community Study Board.