Join the CDS on Monday, February 22, 2021, for a discussion of digital partnerships, TikTok/ByteDance, and non-traditional career paths with Harish Sarma T’11, Director of Global Partnerships for ByteDance (parent company of TikTok), leading the company’s partnerships for all of North America. 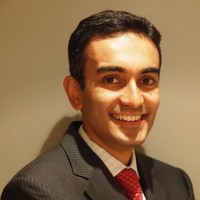 About Harish: Upon graduation from Tuck in 2011, Harish started out in investment banking with Morgan Stanley before moving to the NBA where he helped transform the organization through global partnerships and digital product distribution deals. His roles and experience at the NBA led him to his current role at ByteDance.

About ByteDance: ByteDance is a technology company operating a range of content platforms that inform, educate, entertain, and inspire people across languages, cultures, and geographies. Dedicated to building global platforms of creation and interaction, ByteDance now has a portfolio of applications available in over 150 markets and 75 languages. For example, TikTok, Helo, Vigo Video, Douyin, and Huoshan.

Registration for this event is now closed.