Dan York, EVP, Content
AT&T
Dan York, EVP, Content, heads the content strategy and acquisition for all AT&T platforms: television, broadband and wireless. In his role, York and his team set the content strategy for each platform and negotiate all linear and on-demand programming deals, including national networks, sports, music, movies, international, interactive services and broadcast television. AT&T is expanding its fiber-optic footprint deeper into its network to deliver AT&T U-verse TV, voice and high speed Internet access services. AT&T will reach 30 million households in 2011 as part of the initial deployment. The company is also the country’s largest broadband provider with over 16 million subscribers and has over 82 million wireless subscribers.

Prior to joining AT&T, York was senior vice president, Programming and Development at iN Demand Networks. He oversaw all content acquisition, program planning, scheduling and distribution to other platforms. Previously, York spent more than 12 years at HBO, most recently as VP/GM of Time Warner Sports/HBOPPV. There he was responsible for marketing, content acquisition and distribution, programming operations, and sponsorship.
A 20-year media veteran, York started his career at HBO in marketing.York holds bachelor’s and master’s degrees from Michigan State University.

Barzilay also served as Senior Vice President, Disney/ABC Cable Networks, and General Manager, Toon Disney and ABC Kids. He oversaw all operations at both Toon Disney, a 24/7 cable network, and ABC Kids, the children’s programming lineup on ABC-TV. He also held the post of Vice President, ABC Television Network Group and worked as a senior attorney for Capital Cities/ABC, counseling ABC on legal and regulatory matters.

Barzilay began his career as an attorney in private practice in New York. He is a graduate of Harvard College and Columbia Law School.

Murphy also oversees the sales, and pricing and packaging strategies to increase distribution of the company’s broadband, interactive and video-on-demand services with multichannel video programming distributors (MVPD’s). Murphy is based at ESPN’s headquarters in Bristol, Conn.

Murphy has held various positions within the affiliate sales and marketing department at ESPN including vice president, alternative technology and new media sales, where he was responsible for ESPN’s pay-per-view business and special-market affiliates. Prior to that, Murphy was director, northeast region, where he was responsible for corporate accounts including Time Warner Cable, Cablevision and Insight, as well systems within the New York City DMA. He joined ESPN as an account executive, eastern division, in March 1993. Murphy earned a bachelor of arts degree in European history from Washington and Lee University. 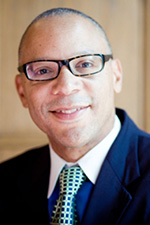 Alva H. Taylor
Faculty Director
Associate Professor of Business Administration, Tuck School of Business
Dr. Taylor is an Associate Professor in the Strategy and Management Group at the Tuck School of Business at Dartmouth and Faculty Director of the Glassmeyer/McNamee Center for Digital Strategies. Professor Taylor’s research focuses on the innovation process, entrepreneurship, technological change, and strategic decision making in fast-changing environments. His recent work has been on how to structure and manage creative groups for sustained innovation and

with companies such as Intel, Oracle, Norfolk Southern Corporation, and Monsanto Corporation as well as numerous start-up companies.

Professor Taylor’s work and ideas have been published in top business journals such as Administrative Science Quarterly, Strategic Management of Technology and Innovation, Academy of Management Journal, and Organization Science. He has his doctorate in business from Stanford University, his MBA from the Johnson School of Management at Cornell, and both his Bachelors and Masters in Engineering from Cornell.