Home Blog iOS vs. Android App Development: Where to Debut Your Startup’s App

iOS vs. Android App Development: Where to Debut Your Startup’s App 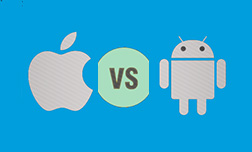 Here at Tuck we are lucky to have a large group of eager entrepreneurs looking to find their place in the world and develop the next big idea. At the Center for Digital Strategies we often find that, for our Fellows and other students, that means creating a new venture centered around a smartphone app. But where to begin? What platform is best for a startup?
With an overwhelming marketshare, Android has the ability to reach a much broader audience. However, at the recent GeirHeads Technology Conference, the choice was clear for Nathan Sharp, Co-Founder, Nifti and recent Tuck graduate: start with iOS, nail it, and then adapt it for Android.
With such variation in the devices currently running Android, Apple is able to clearly deliver a single, uniform experience for application users. With some exceptions for older phones, an iOS application will largely look and act the same way on all iPhones, which may or may not be the case for phones running Android. Certainly there are always other factors that play a part in determing onn which platform app developers should start development, but the clear message in the market is to start with an iOS app and then move onto an Android app.
What are your thoughts?

We’d love to hear your thoughts in the comments section!

Amazon vs. Apple: Competing Ecosystem Strategies
Tech Bytes to Know this Week: 6.22.2016
Is the Enterprise Cloud all about Costs?
Tuck Career Insight Expeditions Kick Off in San Fr...