Maj. Gen. Reynolds visited Tuck for the Women’s Symposium and spoke as a guest of the Center for Digital Strategies to a small group of students. She also met with CDS MBA Fellows and members of the Tuck Veteran community. 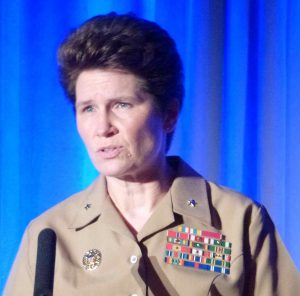 Major General Reynolds was commissioned a Second Lieutenant in May 1986 upon graduating from the United States Naval Academy. Throughout her career she has served in a variety of command and staff billets in the operating forces. As a Lieutenant, she served as a Communications Watch Officer at the Base Communication Center, and later returned to the Division Communications Company where she served as a Communication Center Platoon Commander, Multichannel Platoon Commander, Operations Officer, and Radio Officer. As a Captain and Major, she served with Marine Wing Communications Squadron 18, 1st Marine Aircraft Wing Okinawa, Japan as a Detachment Alpha Executive Officer and Commanding Officer. She served with the Ninth Communication Battalion, 1st Surveillance, Reconnaissance, and Intelligence Group as the Assistant Operations Officer and Commanding Officer, Bravo Company. As a Lieutenant Colonel, she commanded Ninth Communication Battalion, I MEF and deployed in support of Operation Iraqi Freedom II in Fallujah, Iraq. As a Colonel, she commanded I MEF Headquarters Group and deployed the Group to Camp Leatherneck, Afghanistan in support of I MEF FWD/Regional Command Southwest in Helmand Province during Operation Enduring Freedom. She recently served as the Commanding General, Marine Corps Recruit Depot/Eastern Recruiting Region, Parris Island, SC.

In the Supporting Establishment, she has served as an Acquisition Project Officer at the Marine Corps Systems Command, Candidate Platoon Commander for Charlie Company, Officer Candidate School, Commanding Officer of Recruiting Station Harrisburg, Pennsylvania, an Action Officer and Deputy Division Head for Strategic Plans Division, Command, Control, Communications, and Computers (C4) Department, Headquarters Marine Corps and as Division Chief (J6) at the Joint Staff in the Pentagon. Her most recent assignment was as the Principal Director (Asia & Pacific), Office of the Deputy Under Secretary of Defense (Asia & Pacific).