Home Blog The More Things Change . . What does General Management Mean in the Digital era?

The More Things Change . . What does General Management Mean in the Digital era?

Last fall, the Center for Digital Strategies hosted PK Executive Chairman Tom Monahan at Tuck for the Britt Technology Impact Series. Tom reflects on that experience–and expounds his thoughts further–in an article we are resharing for you here.

Most CEOs I know share a dirty secret. The question they most fear isn’t likely to come from a overcaffeinated analyst on a quarterly earnings call, or a fleece-vested VC/PE type in a board meeting.

The question we most fear is from one of our own team members. Particular a dynamic, high potential star in one of the engines of the business – sales, product development, client management, etc. It can come in a bunch of different forms, but usually boils down to four or five words: “What do you do?” or, as one particularly skeptical sales leader once asked me “What do you actually do?”

It’s not an easy question – particularly when asked by someone who themselves certainly does something. Most roles in an organization have a functional lens, and some concrete responsibilities and accountabilities. Salespeople create revenue by securing relationships and – ultimately – financial commitments from customers; a product manager creates and enhance the value of products, engineering creates technology etc. While the CEO might engage customers or share opinions about products (or HR processes, financing structures, real estate footprint, marketing messages, UX interfaces, logo fonts, cafeteria menus, etc.), they don’t really do any of that. The CEO as it turns out, is a general manager – maybe a bit of an amplified general manager, but at his/her core, a general manager – a leader with responsibility for turning all that doing into durable growth and profit streams.

At our core, most CEO’s and general managers find this question hard to answer for two reasons.

I was recently invited by Patrick Wheeler, Professor Alva Taylor, and the Glassmyer/McNamee Center for Digital Strategies at Dartmouth/Tuck to give a talk as part of the Britt Lecture Series on just this topic. Loosely titled “The Role of the General Manager in the Digital Age,” it focused on the question of how the use of technology across the business system is changing (and is not changing) the role of the general manager. It was an obviously relevant topic – while Tuck students may have a range of interest areas and first jobs as newly minted MBA’s, the vast majority of them will find themselves in General Management roles down the line – either intentionally, or because career progression will take them there.

Usually anyone who asks me for advice about General Management, gets directed to the late Andy Grove’s High Output Management or Bryce Hoffman’s American Icon: Alan Mulally and the Fight to Save Ford Motor Company – great first and second hand looks at what I’ll call the “managerial work of a great leader.” (There are obviously lots of great leadership books, but these show how leaders actually manage.). One theme that leaps of the page is that both Andy Grove and Alan Mulally seem to spend a lot more time asking questions than answering them. As my friend Chris Clark routinely points out, “the difference between failure and success is always asking one more question.” In that spirit, it probably makes sense to share questions that the “digital-era” GM’s should be asking of themselves and their teams.

With Apologies to Led Zeppelin, The Song Remains the Same

While there are facets of the job that have changed, there are also there is actually a lot of evidence in the “no change” bucket. The following questions are would have been core to the GM job well before the digital era and and remain so today. Sure, there are ways that the digital era changes the “how” of general management (better/more timely measuring/monitoring, increased team collaboration, and new leadership development methods, just to name a few), but a few “whats” that just don’t change.

“Do we have sufficient clarity about (and alignment around) how we create and capture value? And is the way we do this distinctive in the eyes of our target customers? (And, of course, how well are we doing?)” The job of the GM can be simply explained: create and capture value. Creating value requires targeting a customer and need and mobilizing teams and resources to meet that need in a way no one else can. Capturing value means bringing that value to life for customers in a way that rewards shareholders, employees, and society. The GM’s role in a digital age is still about strategy, goal setting, finding and motivating people, organizing work, and measuring results.

“Which technologies will matter most across our business system? In which of these will we seek leadership? How much technology risk are we willing to take?” Contrary to conventional wisdom, technology strategy is not a new element of the GM’s job. Since (at least) the mid-1800’s, GM’s have had to think about how and when to test and deploy new technologies – either as part of their offer or within their own business system. This research depicting GDP per capita growth in Britain since 1270 points to a productivity acceleration beginning in the late 19th century that signals a relentless onslaught of new technologies. The variety of technological developments, and the variety of maturities means that GM’s have been making decisions about which technologies to bet on, and when to make those bets, for more than a 100 years.

A current cook’s tour of enterprise-shaping technologies would not only include IOT, cloud computing, 5G, RPA, AI, Quantum computing etc., but across time would include similarly disruptive technologies like mass media, containerized cargo, hybrid seeds, etc. In overly simplistic terms, no one can master all of these technologies, so deciding where to excel matters, as does daring to be average in others. And, as someone who lives in the technology world, this is particularly true even for technology products and services – regardless of how literate you are about your own technology, if you can’t bring it to life in someone else’s business system, you will fail. So understanding your customers’ and suppliers’ choice models matters hugely too.

“Do we have the people we need to win? Are they organized correctly?” It is, yet again, about the people. The General Manager is exactly that – a generalist. If they are the smartest person in their organization about AI modalities or hybrid cloud architecture, short the stock. Same is true for balance sheet structure, comp system design, social selling, lease structure, fluid mechanics, jet engine repair, avocado transport or dozens of other topics where specialists have rich domain knowledge. The ability to attract, motivate, and evaluate people with more specialized knowledge than you is the job definition. This isn’t an argument for technical illiteracy – in fact, you need to be highly literate in, and highly curious about, the most relevant dimensions of technology in your business. And beyond having great people, making sure that they are organized correctly with clear roles and connection points. A recurring theme of Bill Campbell’s coaching was “work the team, not the problem” — this is true whether your product relies on containerized architecture, containerized cargo, or both. And as BCG’s work on the bionic company points out, it’s not just organizing your team so they function effectively, it’s integrating people and technology in new ways.

“How do I best assess someone with technical skills I don’t have?” One of the hardest elements of any management role is evaluating the technical chops of direct reports in disciplines you don’t know, or in evaluating ideas outside your area of expertise. A CFO who grew up on the treasury side of finance will need to pick and empower a world-class Controller – and partner with them on important decisions — despite not having done that job. There’s no real hack to this, but the best managers I know use their networks as extensive kitchen cabinets – finding and tapping people for expertise about subject matters far afield from their own. Ironically – I’ve found this to a great excuse to ask the question at the top of the post: nothing is more illuminating that asking a world class leader in a different discipline that yours “what do you do?” (maybe without the suspicious tone). To see this at scale, check out my friend Allen Gannett’s “burst” interviews with leaders across technology and marketing.

With Apologies to James Brown, Papa’s Got a Brand New Bag

On the other side, the current pace of technology evolution has changed, and continues to change, the GM job — in some ways we are just beginning to understand.

“Does our data and analytics strategy balance reward and risk? Do we even really understand where algorithms are taking our business? ” Usually, a distinctive digital strategy fuels and is fueled by a distinctive data strategy.  I’ve written about this before, in a world where targeted scale matters, defining a narrow enough scope to rapidly ramp insight is a core strategy element. And the biggest risk factors now center on your ability to select only data you can use and protect.

More broadly, as algorithms increasingly dictate key marketing and hiring tactics, GM’s can find themselves “takers” of strategy rather than “makers” as the key decisions about the positioning of their brands and composition of the teams are made without human intervention and through models that can adapt in ways contrary to original intent. With the ability to monitor and manage automation and algorithmic evolution, GM’s could pretty quickly find themselves in the era of inadvertent strategy.

“How can we use a modern technology approach to ‘hack’ scale?” This generation of technology development does change the role of the GM by forcing them to think differently about scale – both with respect to offensive and defensive strategy. The obvious examples are cloud computing which has made the benefits of massive infrastructure investment available at much lower volumes and API’s, microservices based architectures, etc. which allow innovation without massive code rewrites. This ability to hack scale allows strategists both to move faster in executing new ideas, and – likely – makes legacy assets and cash flows less valuable. (And, as Prof. Scott Galloway points out, there’s plenty of evidence that despite what seem to be lower barriers to entry in many industries, there has actually been a remarkable concentration of profit and value in a handful of companies.)

“As we ‘buy in’ technology for speed and scale, can we still develop a distinctive technology strategy?” In the Gilbert and Sullivan’s The Gondoliers, Don Alhambra sings “when everyone is somebody, then no one is anybody.” The point holds special truth for general managers in the digital era – the combination of cloud infrastructure, packaged software, and pre-built analytics can enable anyone to be rapidly digital. Merely being digital isn’t a strategy, however. This puts a huge premium on leaders not to “be digital” but instead to “create distinctive digital strategies” that leverage the same widely available building blocks in unique ways.

“Do we have a realistic view of our future competitors and competitive dimensions? Do we update our view frequently enough?” As Angela Strange points out in this thoughtful piece, the ability to assemble scale infrastructure and mature capabilities in new ways makes the concept of “industry rivals” obsolete, maybe even dangerous. In a world where Apple can become a financial services player or a production studio in a matter of months, the competitive set, and the dimension of competition can change more rapidly than most planning and resourcing cycles reflect.

It was a great conversation — and we only scratched the surface of the questions — but I really appreciated the chance to engage in the topic and advance my own thinking. 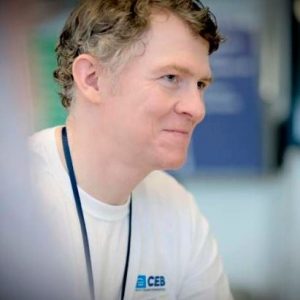