WannaCry Ransomware Attack Still Going Strong – The worldwide scourge of the WannaCry ransomware attack is not done yet. As workers returned to their offices after the weekend, the spread of the virus picked up pace. The weakness used in the attack was a flaw discovered and exploited by the NSA previously released by hackers who penetrated the agency and dumped their findings on the internet. The revelation that the NSA was a source of discovery of the flaw has drawn criticism and reinforces the idea that backdoors, whether purposeful or not, are a bad idea that makes the world less safe.

How Tens of Thousands of Computers Were Infected With Ransomware

Transportation is Now the Hottest Space in Tech – The full digitization of transportation is impressive and happening more quickly than a Tesla on the open road. With a landscape that ranges from self-driving semi-trucks to 3D printing of replacement parts, the players are all over the map. The solution? A map! How analogue! The fine folks at Wired have put together a great rundown of the major players across the future transportation stack:

China Pushes ‘New Silk Road’ through Infrastructure Investments in Asia, Africa, Middle East and Europe – Chinese President, Xi Jinping, hosted world leaders this past weekend for a forum focused on China’s “One Belt, One Road” initiative being called the “New Silk Road” by many. The policy invests billions of dollars to recreate the trade routes between the West and China, using rail and shipping routes as a means of transporting goods and materials between China and destinations as far away as Western Africa and Spain. The project will cost China $150 billion a year and squarely puts China forward as a global economic leader. Notably absent at the forum were heads of state from Western Europe and the United States, which view China’s ambitions as not only an economic threat, but a national security one as well. 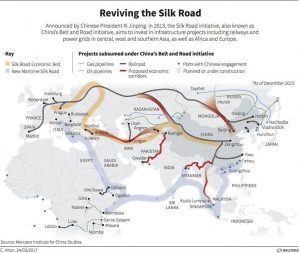 India’s Demonetization Efforts Yield Significant Changes in Tax Base – When Narendra Modi moved to demonetize the 500 and 1,000 Rs notes in India, he did so to fight corruption and bring India’s largely cash-based system into the formal economy of India. New data revealed by India’s Union Finance Minister, Arun Jaitley, shows that over nine million citizens joined the income tax pool as a result of the demonetization moves. That’s a staggering number on par with the size of the entire population of New Jersey. And despite India’s population topping out at over 1.3 billion people, only about 37 million filed federal income tax returns in 2016. That means the tax base just grew by about 24% from last year.

Waymo and Lyft Join Forces to Battle Uber, While DC Cabs Turn to Square to Hold Ground – As Uber defends itself against a legal battle that it’s losing to Waymo, the Google company is joining forces with Uber’s closest rival Lyft. Waymo will partner with Lyft to get self-driving cars into the service and push the company ahead of Uber in the race to our autonomous transportation future. Not to be left completely behind, DC cabbies sign a deal that will swap out mechanical meters and payment processing with new, app-based solution integrated with Square for payments. While the move is a few years late, it will make the cab experience easier while also reducing fees paid by cabbies to processors under the current system.

Featured CXOTalk Video of the Week: The Social Future of Digital Marketing with Sprinklr Founder and CEO, Ragy Thomas

Marketing’s future is digital, personal, and social. Ragy Thomas founded Sprinklr, a startup unicorn and social media management system that spans from Facebook to Pinterest, and from marketing to customer care. Tune in for his insights on how to wrangle social into an effective marketing channel without creeping out your customers.