Yahoo Reveals the Largest Data Breach in History (1 Billion Accounts)  – More than any other issue, data breaches and information security were the biggest stories of the year. From the LinkedIn breach that compromised the user information (including passwords) of 167 million accounts to revelations of a breach at Yahoo’s email service that impacted 500 million accounts, it was a rough year for tech firms and their customers. This week Yahoo revealed another data breach that impacts 1 billion (with a ‘B’) accounts. The hack appears entirely separate from the previous hack that occurred in 2014, but which the scope of only came to light during due diligence conducted following the announcement of an acquisition by Verizon. These two breaches are now the two largest in history.

Uber Self-Driving Car Drives Without Permit in CA, Immediately Runs Red Light – Uber launched a self-driving car in San Francisco this week, despite not requesting or receiving a permit from the State of California. In a hilarious twist, the car ran a red light on its first (and only) day operating before the state shut down the test. The events raise two important questions:

In this case Uber was asked to cease operations until it applied for and was granted a permit for operating a self-driving car, but the pending conflicts over who is responsible for accidents and traffic violations and how that process will be adjudicated and rectified remains to be seen and will likely require several parties to come to agreement, including the developers of the technology, DMV officials, legislators, and insurance companies. That’s likely to be a much more challenging agreement than some realize, especially given the competing interests, asymmetry of information, and political winds currently blowing against automation and resulting job loses in many parts of the United States. 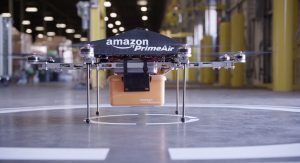 Via Drone – When it was denied the ability to test drones in the United States due to FAA restrictions on drone operations, Amazon took its fleet to the U.K. That move has worked out pretty well for Amazon, and the company announced it delivered its first order via drone this week. The first delivery included an Amazon Fire device and popcorn to enjoy watching all that Amazon content. The entire delivery took 13 minutes from order to fulfillment, to delivery. While it’s not likely we’ll see a fleet of drones taking over all our deliveries tomorrow, the successful delivery is a sign that yet another automated task has arrived. 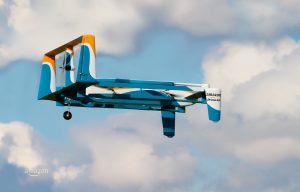 Tech Leaders Meet with President-elect Trump in New York – As is becoming routine for the President-elect, he convened a session with top tech leaders, including chief executives from Apple, Microsoft, Facebook, Google, Amazon, and Tesla. The session was largely held behind closed doors, but it began with a public session where Donald Trump praised tech leaders for their brilliance, innovation, and ability to grow their businesses. Given the divergence of views between the President Elect and tech leaders on issues of immigration, privacy, security, and trade it’s unclear how much common ground can be found between the two sides over the next four years. Only time will tell.